With the Super Bowl on last night (an interesting time to be in Boston), I started to think about advertising on television. How effective are commercials at reaching college kids and twentysomethings?

This one makes me want to graduate. Without a mini-fridge.

Most of the time, I talk about college kids and twentysomethings interchangeably.  The two groups overlap frequently and tend to have a lot in common, so many times it makes sense to lump the two together. However, there are a few areas in which the two groups are very different. One of them is television habits. In this two-part article, I will explore the television habits of college kids and twentysomethings and how advertisers can play those habits to their advantage.

First up, college kids. Stay tuned for the second half on twentysomethings. Ready? Play ball!

If you were like me last night, you went to a Superbowl party and watched the game with your friends. You were probably in a group, all gathered around a single large television, chatting during some plays and commercials, paying very close attention for others.

This wasn’t a normal television night, this was a tv event. When college students watch a physical television live, it is almost always for a social gathering. It doesn’t have to be a big game either. I have a group of friends who would watch Jeopardy! every night religiously in the common room of their dorm. One marketing analyst from a Youth Trends market research team studying the phenomena explains in an interview, “Watching TV live is considerably more of a social event for them than it is for you and me. It would be like every Thursday we’ll watch “Grey’s” at so-and-so’s place at 9”. 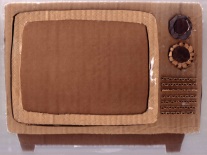 “Hey look! A television I can afford!”

Besides being a cheap college kid (a phenomena I explore in depth here) who doesn’t want to pay for cable, I watch television online because it makes sense with my schedule. I like the idea that, if I need a study break at 11:30pm, I can just watch a show online that aired live at 8:30pm the previous night. I can keep up with the shows I want on my time without having the extra expense of a television, DVR or cable.

What does this mean for advertisers hoping to court college students? Unless your show is an “event” show that students will gather for every week live, your best bet is online advertising.  Since Nielsen now incorporates college students living away from home into its rating systems,  it will be easier to anticipate what shows students are willing to tune in live for with friends. However, with the increase of relevant programming for college students and media available to view it, be assured that college kids are still watching plenty, if not more, television than you might expect–just not in the traditional live medium.

Thanks for reading! Lindsey Kirchoff

What do you think? Cancel reply